June 25, 2010
I2S stands for Inter Integrate Sound and is similar to the I2C which is used for transmitting data between Chips on a circuit board. (wikipedia article on I2S). I2S is used for connecting digital audio devices together, (for example between the main processor and the audio codec chip on cell phones or computers or between the CD transport and the DAC in a CD player).
I2S interface consists of atleast 3 signals:
The eKA8562A Chip which is a USB Audio Controller (and can be used as an oscilloscope) sports an I2S interface. Here are a few signals captured at the various pins (I2S output) on this chip: 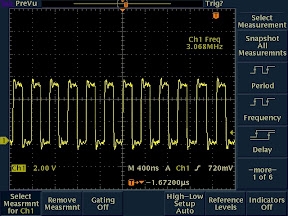 Pin 5 of eKA8562A - I2S BCLK Output
Clock - This signal is used as the clock to latch in the bits appearing on the data line. 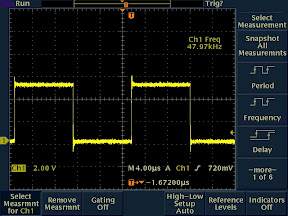 Pin 6 of eKA8562A - I2S LRCLK Output
Left Right Clock - This signal is used to tell the receiving device whether the data being received by it on the data line is meant for the left audio channel or the right audio channel. 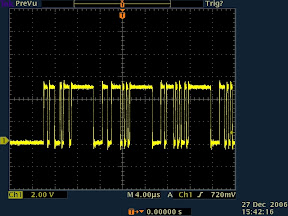 
Since eKA8562A is a USB device, it uses a 12MHz Crystal as its clock source: 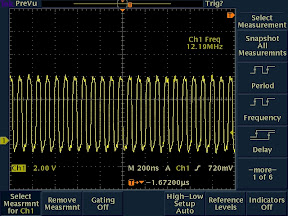