November 12, 2015
NOTE: Here is the list of various other Community Computers that I built using various other projectors and single board computers over the few months of my fellowship.

As I began my Teach For India fellowship, I got inspired by the K-Yan and decided to build my own community computer for my own class of 48 7th graders. I tried building one using a Raspberry Pi, but the results left much to be desired (Couldn't install Prezi, wasn't powerful enough, video player required commands to operate, no internal storage etc). That's when I came across Intel's Next Unit of Computing (NUC) PCs. These are small form factor PCs built for portable applications like interactive kiosks etc.

Since these PCs only have and HDMI output, I would need an HDMI capable projector. So I asked my friends for donations and went shopping and bought these:

So for under INR 48,500 I had managed to collect all the components: 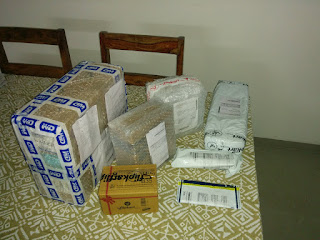 I began by installing the HDD and RAM in the NUC PC and Installing Windows on it using a pen drive. Installing Google Drive on the PC (I have WiFi at school too), allowed me to sync stuff from my home PC to this Community Computer easily 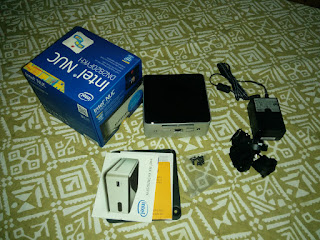 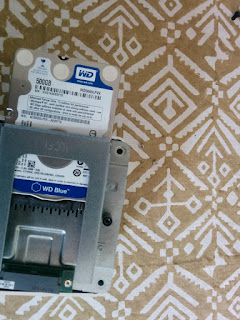 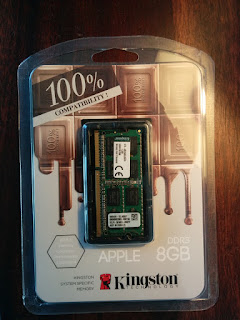 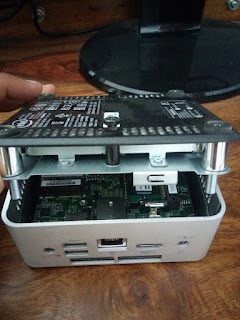 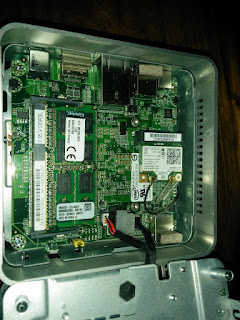 Next I mounted all the components on a piece of plywood (I had to add in a powerstrip and phone charger to power the speakers) and voila!: I had an easy to carry community computer which took no time to setup and assemble at the start of the class because all the components were always wired together beforehand and did not need any connection and disconnection. The setup just had a single 3 core AC mains cable coming out of it. I could now go into my class, setup the projector, and show videos, photos, powerpoint slides, prezis and all kinds of content to my kids. 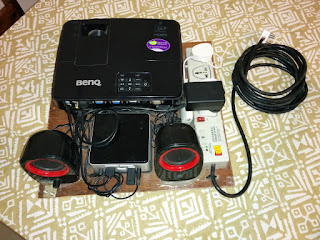 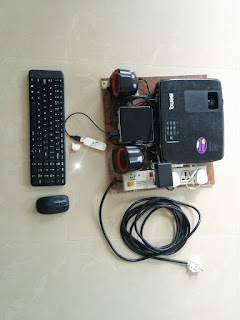 Carrying it around was still cumbersome and the plywood meant it wasn't sturdy enough.
Also, I had to carry the keyboard and mouse separately.

I was looking for a way to make it more compact and easy to carry.
That when Mr Rohit Garg, who owns a electronics goods and service shop here in Aundh, Pune suggested that I mount it in a casing meant for a voltage stabilizer. I gave him the current setup and this is what he came up with: 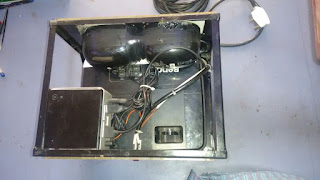 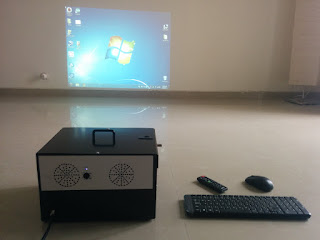 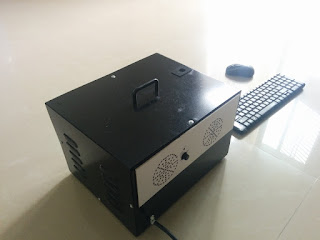 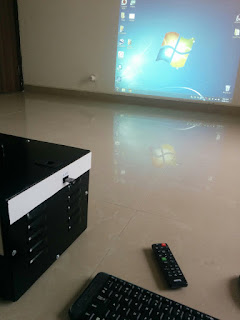 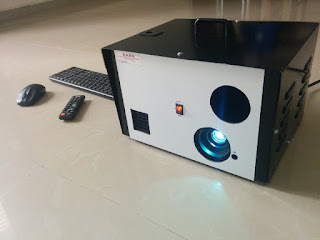 This made it immensely more sturdy. But the keyboard and mouse still had to be carried separately.
That and the ventilation was a big issue. I did not want the projector/PC's lives to be diminished just because of lack of ventilation. Rohit had made cut out for vents but somehow it did not seem enough for me. So I did away with the shell, and while I was at it, I added a lunch box to hold the projector's remote and wireless mouse. For the keyboard I added velcro (loop and hook) stickers to make it easy to stow inside the case itself. The Community Computer now had to be carried using two hands which was more comfortable. The keyboard, mouse and the projector remote are now stashed inside the community computer itself.

Intel has recently come up with the Intel Compute Stick. The compute stick is a cheaper replacement for the NUC PC. The stick has 32GB of eMMC storage (its like an SSD Hard Disk) and 2 GB of RAM already inside it. It retails for INR 9,800 on flipkart and comes pre-loaded with Windows 8.1: 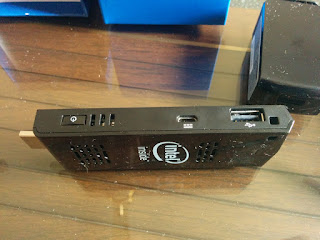 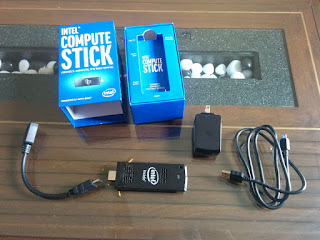