The transaction was carried out by Paypal on my credit card. (Exchange rate: 1 Indian Rupee = 0.0175420US Dollars)

The original invoice was in USD (PDF sent to me via email): 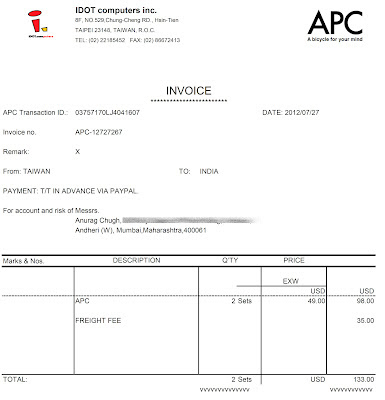 The units were shipped on 27 July 2012 and the tracking was made available online the next day. Within 2 days the package had arrived in India, but it was withheld at the customs office for many days without any additional communications: 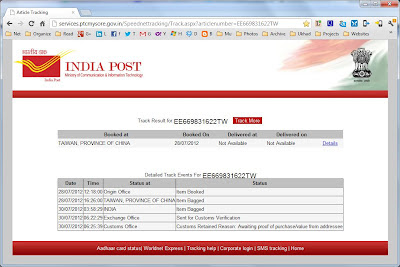 A week ago (27 August 2012 - a whole month after the device was shipped), I received a letter from the "Office of the commissioner of Customs (Import)": 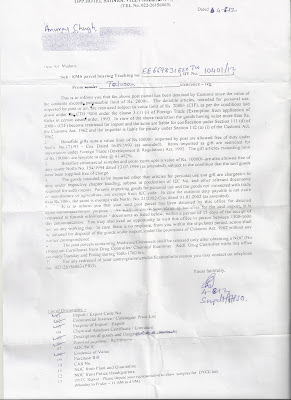 The first crazy thing is this "request for documents" letter itself was dated 4 August 2012 and it reached me 3-4 weeks later even though both the source and the destination of the letter lie within the same city less than 10 kilometers apart. This is fucking pathetic - don't know why it's called snail mail, when its speed is worse than a snail's speed:

Anyway, so I read the letter and this is what I understood:


And so, I called the phone number specified on the letter on Saturday,1st September 2012. The lady on the other end of the line (I had to call a couple of times before my call was answered) informed me of the following:
I decided to visit the office in person for two reasons: I wanted to know where this office was and how it worked and also I did not have any more patience to wait for the documents to reach them via super-snail mail. And so I visited the office the same day (1 September 2012). It was bang outside the domestic airport, here's a photo and a google map link: 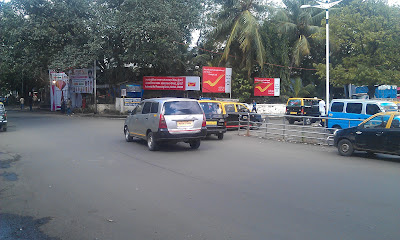 The security guard at the gate made an entry in visitors register which I signed and informed me that the offices I wanted to visit was on the first floor.

The first floor was sort of like a terrace/quadrangle with a passage running along its perimeter leading into various offices. I found the office that I wanted and saw a few people waiting outside it, the security guard stationed outside this office asked me to wait till the attended arrived. I was made to make an entry in a register specifying a BY number (specified on the letter which I had received) and asked to wait outside again till my package was located. About 45-60 mins later, I was called in again, and asked to produce documents affirming the value of the goods. I showed them printed copies of the invoice and the credit card accounts statement. They told me that a fine would be levied along with the duty: i.e. 5000 INR (fine) + 3110 INR (duty at 41% on 7581.80) = 8110 INR which is even more than the amount I paid for the goods. I told them that I had received goods of similar amount earlier and the was never fined, only a duty was levied. (I had collected my CuBox from my local post office by paying a duty of 3600 INR on the value of 8800 INR). The officers there opened the package in front of me and inspected the items within. They asked me if I was a student or a working professional and a few other personal question which I answered promptly. They agreed to impose only the custom duty on the device. They returned the invoice and other documents back to me and told me that the package would be forwarded to my local post office. From the there the postman will deliver the package to my home and collect the duty from me.

While exiting the office I met an agent/consultant of sorts which do the running around such government offices for you in case you want to import/export something. He told me that if I apply for an import/export code (IEC) from the Directorate General of Foreign Trade's website (http://dgft.gov.in), I would be able to cut down the hassles involved in clearing customs and also cut down the customs duty levied on the article. IEC can be applied for by individuals as well as registered companies and "seems" to be the "legally correct" way of getting stuff from abroad. He told me that if I had an IEC, the duty on the imported goods would be applied depending on the category of the goods instead of the flat 41% on the total value of the package. So in my case (electronic items) the duty would have been 16% instead of 41%.

I haven't yet gone through the foreign trade policies and procedures available on DGFT's website yet, but I guess if you regularly buy stuff over the internet from foreign firms, it would be in your interest to familiarize yourself with these rules and apply for an IEC code.

Wouldn't it be nice if we were given an overview of various departments of our government and their policies and procedures in school/college? It's such a pain to remain clueless for days all because you don't know which department to contact and you end up waiting for them to contact you.

So here's a short summary of my experiences of acquiring stuff from abroad:

Why would I want to buy stuff from abroad:


Ways of getting stuff into India:
There is another option of getting stuff India which I am going to try the next time: Order stuff online using your credit card and get it sent to your friends place abroad. Try to convince the seller to not include the shipping charges (even though it is domestic shipping between the warehouse and your friend's house) in the invoice - if possible as your friend to bear the shipping charges separately like for example using a FedEx account number etc. You can order stuff having value equivalent of upto 10,000 INR (i.e. 180 USD). Ask your friend to forward the package via EMS/SpeedPost with the invoice attached to the outside of the package clearly visible. Also ask him/her to include a letter (again attached to the outside of the package) saying that the items within the package are meant as a gift for you.

So, S and R, I am going to trouble you for this soon.

Update: 5 September 2012:
WHY WAS MY PARCEL SENT FROM MUMBAI AIRPORT TO SANPADA AND VASHI INSTEAD OF VERSOVA??? STUPIDITY!!! ARRRGGHH!!! Seems like those APCs are being treated to Mumbai Darshan! 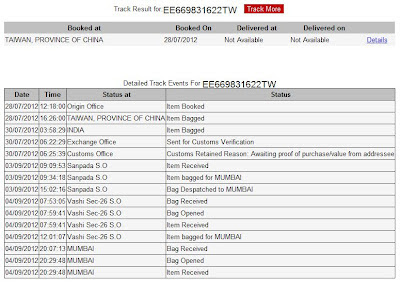 Update: Friday, 7 September 2012:
The package finally arrived, on the 6th day after visiting the customs office.
Had to pay the postman a duty of ~ INR 3100.
All in all, a very frustrating experience! 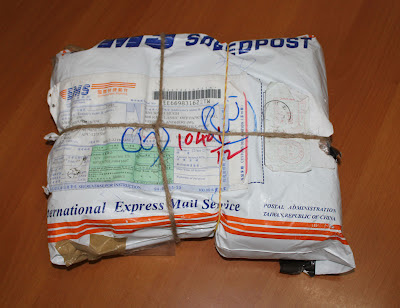