Now days microcontroller platform for IoT devices are becoming more and more powerful so much so that they can now sport an HTTPS stack and hence send telemetry to an HTTPS capable data broker like initialstate.com. Which means no need for any linux based gateway/hub - you can do away with your Raspberry Pi as a go between your microcontroller node and the internet.

You ask why would some one want to do that? Simple - lesser the number of components in your system, lesser the points of failure.

So, I wanted to explore if it was possible to use a Particle Photon to send data directly to initialstate.com and recently it just became possible when a few good folks ported an SSL library to Spark Photon. 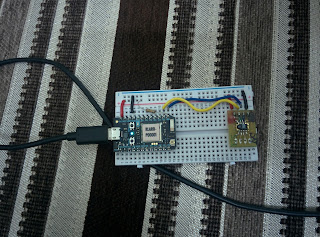 Steps:
Here is what my lines app view on initialstate.com looks like, the "Inside_Temperature" and "Inside_Humidity" show the data sent by my Particle Photon to my Home bucket which also includes streams from various other IoT devices that I have installed in my home.