November 10, 2016
I have 6 IoT devices in my house. Most of them are DIY and I have documented their build processes on this blog. One of them is a commercial product.

Out of these, the ADS-B Receiver and the Vstarcam (both running linux) kept losing connection to the cloud regularly. I have a few theories behind why this might be happening:

The Raspberry Pi2 used for ADS-B receiver is quite capable and I was able to quickly write a cron job that runs every 10 minutes to check if it has a sane connection to the internet and if it doesn't, it reboots the Pi. A blog post documenting it is here.

As for the Vstarcam HD C7838WIP, well its a whole different story. The Linux distro for RPi2 is an SD card image which has many command line utilities pre-installed which makes our life easier. The Vstarcam has its linux running from a flash chip inside it and so the manufacturer had to limit the number of software packages that make it up. But I was able to figure out how to get around those restrictions and have a script running in the background doing its job of detecting internet outage and rebooting the device. Here is how you go about it: 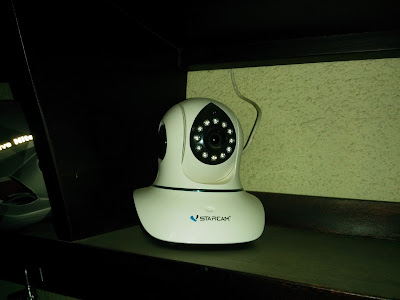 You might have heard of Mirai botnet and there vulnerability it uses to infect security cams like these. Console access to most of these security cams can be gained by simply telnetting into it (although from within the same LAN that they are on) and using the login as "root" and password as "123456" (Read more here). The password "123456" is hard coded into the read only file system and cannot be changed.

The df and ls command show us the layout of the memory partitions and filesystem.

The /system and /mnt/sda0 (SD card) are the only two read-write areas of this camera. So we can write and save a hand script to check the "online-ness" of the camera in either of these location. I chose to save it in /system (which is inside the camera itself and not on the easily removed/lost/corrupted SD card)

So I cd over to /system and use the command "vi pingtest.sh" to save the following script.
(Press i to put vi in insert mode, then past the code into your PuTTY, then press Esc and then type :wq! to save and exit)

Once the script is set we need to mark it as executable. Issue the command "chmod +x pingtest.sh".

And now we need to set the script to run in the background at boot up. For that we need to add it to the init script which the manufacturers have created for their on purposes. Issue the command "vi /system/init/ipcam.sh" and add the following line to the end of that script and save it: "/system/pingtest.sh &"

The ampersand makes sure that the script is begins running in the background.
After you have saved the script, reboot and check if its is in fact running using the ps command:

So what this script does is to check if it is able to ping the Google's Public DNS server. If yes then it goes to sleep for 10 minutes and repeats the process. If the ping fails, it issues the reboot command.

And this will ensure that the camera always stays connected to the internet - ofcourse there will be a downtime of a few seconds when the camera is rebooting and not recording, but that is something I can live with.

In case you don't want to reboot the camera, but just want to toggle the WiFi interface, use the following contents for /system/pingtest.sh script instead: