We have an HP LaserJet 1020 plus which we wanted to share on our network. Since this is a printer which only has a USB port, it can be shared by connecting it to a windows computer and sharing the printer via homegroup. But this required us to keep the connected computer on all the time.

So I decided to try out the TP-Link Wireless Print Server TL-WPS510U. In India it costs around ₹5000 and so it makes sense for anyone to go for this device to retro fit your old printer into a a network capable one.

But there is a caveat. The supplied CD which allows you to configure the software won't work on any PC. The TL-WPS510U is configured to join an "Ad-Hoc" WiFi network named WLAN-PS. The supplied software on your CD, makes your PC join this Ad-Hoc network and then sends commands and credentials to the TL-WPS510U over this Ad-Hoc network and instructs it to join to your home/office's WiFi network (i.e. your WiFi Router which operates in infrastructure mode).

Now now all WiFi adapters support Ad-Hoc mode. So the software on the CD supplied with TL-WPS510U will not work on all computers. To check if the WiFi adapter on your PC supports Ad-Hoc mode, type the following command in the Command Prompt Window (Press the Windows Key + R and type cmd and press enter):

I executed this command on two of the computers I have access to. Check the field "Hosted network supported". If it says "Yes" then your computer can host ad-hoc networks.
Sometimes it might be possible to upgrade your WiFi Chipset drivers and have the ad-hoc capability enabled in the new drivers. But if that does not work for you, make sure you run the CD that came with TL-WPS510U only on a computer that supported hosted networks. Before you run the CD on a particular computer, will need to make sure that the computer has the target printers drivers pre-installed on it. To do that, connect the printer to your computer via USB to the computer and install the driver from the CD supplied with the printer. And once that is done, you can go ahead with setting up the print server for it.

Once you have configured the TL-WPS510U and gotten it connected to your network, you will need to go to each computer on the network and configure them to be able to use the printer. To do that, make sure you have the printer drivers installed on all the computers that you want should be able to print to the printer over network.

Now you can run the CD on each computer you wanted to connect to the printer. When you are doing so, make sure to select "Setup Wizard" instead of "Easy Setup". We use "Easy Setup" on on the first computer when we are trying to configure the TL-WPS510U to connect to our home/office WiFi. For all consecutive computers on which u want to use the printer, select the "Setup Wizard". Once the printer server has connected to the network, you no longer need the computers to support "Hosted network" to be able for it to print to the printer via the print server.

Once you go ahead with selecting "Add a printer using TCP/IP address or hostname", you will need to know the setting to use with the print server, here are the settings (Change the IP address to your own print server's IP address) 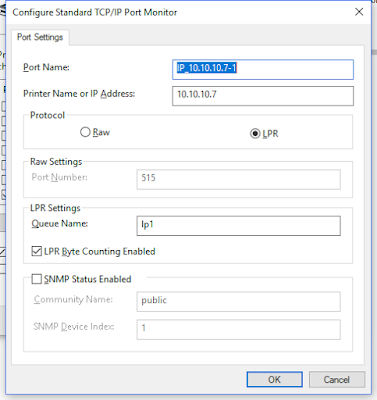 After this screen, it will ask you to select the make and model of the printer that is attached to the print server, make sure that you select the correct one.